As the Catholic part of the globe is getting to their usual lifestyle, Slavic population is just about ready to start a rerun of the internationally celebrated holiday the birth of Jesus. This Holy Day that predates the vastly popular Christmas is happening on the 7th of January, just because of the shift in calendars. While Catholics follow the Gregorian calendar, Slavic churches are following the Julian’s calendar so this holiday comes after the initially celebrated birth of Christ, or before the Catholic’s Christmas depended on how do you look at it.

Orthodox Christmas is also bound by the date, which means it is not a traveling holiday. Every year, Christmas is held on the 7th of January, while some Slava’s can travel through the month. If holiday is to be kept in the first Saturday of let’s say August, the date doesn’t matter, but some of Slava’s do have a date where it doesn’t matter if the day falls on Monday, Tuesday or any other day of the week. For more information about what is Slava, click here.

Serbs like saying that they celebrate two Christmases and two New Years, therefore winter is reserved for many festivities and traditions. Orthodox Christmas is one of the most popular religious events that include many ancient customs, some might consider barbaric, as most of the customs do originate from before the Christ was born. Slavs worshiped the Sun, mother Nature and believed in many supernatural creatures that are been sanged about and prayed to.

I will inform you only on how this special day is being celebrated in Serbia and how my house welcomes the birth of Christ.

Badnjak – the young one, Dan – day; is a morning before the Christmas, so Badnji Dan comes on the 6th of January. In the break of dawn, men gather in the village center and move to the forest. Their task is fetching a christmas tree or commonly known as “badnjak” (badniak). Badnjak is an oak branch, a young sprouted tree that we cut to bring home. Now this custom is very similar to the Catholic version on bringing a live (abies) tree in the house. The difference in these customs is that badnjak is usually a lot taller and impractical to be taken inside the house, so it is leaned near the entrance. 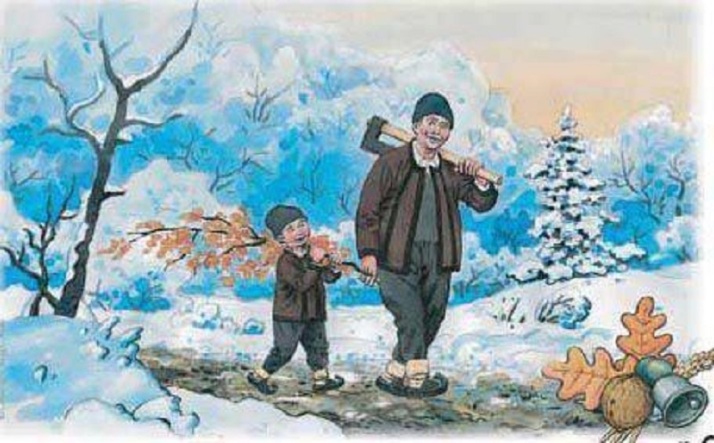 After the tree is cut, men are happily exchanging flasks of rakija, enjoy the lively conversation, eat walnuts, honey and bread and throw firecrackers to let everyone know it’s a holiday. This lasts for a couple of hours where all men take their branches and carry them home.

I need to mention that this is a pagan custom. According to Slavic Mythology, oak was a sacred tree, a tree of life where treetops were considered a home of Gods, trunks were a home of the spirits and mythological creatures; and roots were reserved for the shadow dwelling demons and dark magic. To cut or harm an oak tree was an insult to Gods (multiple deities), to break their home and summon their fury upon your family. To some extent, priests that were converting Slavic barbarian tribes to Orthodox Christianity, this was a test of faith. To a true believer and follower of the Christ, this oaken tree stood as a minor thing to do, a meaningless custom. Because of this, the badnjak represents two things. First one represents the converting to Christianity, abnegation of barbaric ways and acceptance of light. Second represents bringing of the baby Jesus to home as oak branch is holy, young and healthy, accepting Christ.

When the badnjak is set in place near the door, a little branch is being taken from the tree and taken inside. The first one to bring the badnjak is called “položajnik” (positioner). His duty is to bless the house, pray FIRST for the wellbeing of the house residents, pray for the bountiful year, pray for health and wealth, pray for cattle and children. His prayers are performed by the fire where he uses the oak branch to create embers. It is believed that fire is a purification method, a light of Christ and that sparks stirred in the air bring prosperity, golden coins. The number of embers symbolises the amount of wealth expected for that year, amount of children and cattle born into the household. Positioner must name all of the vegetables he prays to have, name the animals he wants to be healthy. He finishes the prayer by lifting the branch and pointing it at the sky so God could hear it.

Every member of the family after him does the same. Those branches are then left over the fireplace, similar to the Catholic custom of hanging socks. Those are the wishes and prayers Slavs have, where in Catholicism, children use this moment to ask for presents. After this, children sit in the circle on the ground, where grandmother pours them whole walnuts and they try to collect as many as they can. This symbolises the hunger of animals (mostly chickens), the collecting represents the strive of prosperity and all of it has a meaning of bountiful year and wealth.

Traditionally, feast is made and family breakfast is held. This feast is prepared “posna”, which means it is made without any animal product and meat, so it is a vegan style meal and in some religious extent a meal prepared only on water, so there is no fat at all. If you want to know more about this style of food, you are welcome to read the “slava” post I linked previously. We are allowed to use meat on the day of Christmas (7th January) after the 40 days of fasting on water. This fasting is also known as a Great Fasting, but tolerated if person is not that religious, so it is reserved for the church personnel and adamant believers.

Evening of the 6th is the most important part of the day. It is believed that Christ is born in the night of the 6th, to 7th which is noted as the Christ’s birthday. The custom starts with the man of the house bringing two oak logs cut from badnjak wrapped in a clean shirt. He is followed by the children that make a chick sound, while grandmother throws water drops over them as a blessing. The image of something neatly tucked like that symbolises the baby Jesus, a newborn God. Ends of the badnjak are brought to fireplace where same prayers and customs are repeated, the same way it is done that morning. After that, man of the house goes outside with his children where he brings in the wheat straws mimicking the mother hen while children chirp like chicks. The wheat straws are settled under the diner table with vessel filled with wheat grains, corn kernels, beans and other food for cattle. This symbolises the cradle of Christ and it goes under the diner table where family is always gathered, at least once a day.

A plethora of differently decorated bread are set on table out of which many represent different things like: a wineyard, a pig, a divine arc (ražanjstvo), a barrel of wine, a meadow with sheeps, a box with cows, geese, a wheel etc. A piece of every bread is taken with a chant and dipt in a glass of wine. A grape bead is taken from the vineyard, a pig is slaughtered and a piece is also dipt in wine, a rose is plucked from the divine arc, a sheep is taken from the meadow, a piece of cow box is broken from the bread, a wheel is broken in total because of the heavy cargo when family expects during harvest and finally, a barrel of wine is opened to salute the prosperity.

The following custom makes all members form a line near the man of the house. He takes the cork from the barrel (the bread piece), pours wine and says “Christ is born”. Every member blesses himself (check the slava post again) then he replies “Indeed, born he is” and takes a sip of wine from the bread. Everybody does this, then dinner is served.

All churches make ceremonial burning of the badnjak in the vicinity of the church where boiled rakija and wine is served. A huge bonfire is made, firecrackers are lit and a midnight prayer recited out in the open.

Česnica with a coin inside it

For the lunch, a great feast is held with roasted pork, different salads mostly Russian salad, boiled cabbage, smoked meat and other things that family might have.

Some people practice gifting the presents, many times from the Božić Bata (Bozitch Batta), which is equal to the Santa Clause in the Catholic Christianity. Božić Bata roughly translates to Christmas Brother, or Christmas Fellow. He is dressed in the woolen fur coat with woolen fur hat, white beard and a bag of apples he gives to children so they would be healthy. Orthodox Christianity and customs do practice the deeper meaning in customs, celebrate the unity and family values, nurture the traditions of togetherness, so Christmas is reserved for a family gathering and on that day, nobody is allowed to visit friends, work or travel.

This holiday is celebrated on the 13th of January. As Catholics have 31th of December, Orthodox have this date as to Julian’s calendar shift of holidays. No special customs are done on this day, but it is usual for the Slavic folk to hang out indoors or even celebrate it on a town’s square. For more informations on how Serbs wait for the New Year, you can see this post.

Overall, you’ve been introduced with the customs and traditions that are performed in this part of the world. If you have a chance, I warmly recommend you to visit one of the Orthodox Slavic countries and see the traditions by yourself. Be sure you have warm clothes and friends nearby. Merry Christmas y’all, and happy New Year.

Here is something different.

So, you want to write about Vampires?

How to write battle scene?

The Rise of the AVKF