Many people gathered tokens, playing cards and other fun things when they were younger, but not me. I collected empty cigarette packs, vile curses and tough friends like a true Slav Boy. Eventually I grew out of those, because a school time has started. Later on I got interested in arts and everything that had something to do with it. Any task I was given at school I measured in my system based on, could I be creative about it, and how much will it be allowed? Soon the arts became my life. During elementary, I liked to join additional arts classes where we practiced our talents. I even tried to make a comic book, but it failed due to my lack of time. At every school play I had one role reserved for me. When I was 11 years old, our hot English teacher gave us opportunity to act in English. Of course I took that. Yeah, son. In high school I took after – hours drama class. We made a play and performed in a very small hall in front of just few people. It is pointless to say… we rocked it. After finished high school, question rose: What now?. I spent whole summer thinking where I should enroll next. A friend told me about University for Pre-school Teachers and it was my first choice. I’m gonna’ get paid to play with kids. With them, I can paint, illustrate, make drama plays, sing songs and so much more, but the paramount was to actually give them courage in pursuing their talent. All of my interests in art I can divide in few groups. Here they are.

My mother told me that, the first thing I took was a pencil. Immediately I started to scribble on a piece of paper and kept doing that like it is the most entertaining thing to me. Maybe I was trying to write, rather than draw. Who knows why am I so twisted, that I had to start telling stories? Among my school friends, I was one of the boys that showed some talent, passion and enthusiasm for illustrating. Arts class was my favorite during the school time and still is. Unfortunately, my arts education is always being kept on beginner’s level, because majority of my classroom familiars were more focused on finding love than brains. If I wanted to advance, I had to do it by myself and in my spare time. Illustrating is still in me, in my interests and goals. With this blog, I have opportunity to practice more and get much needed guidance. 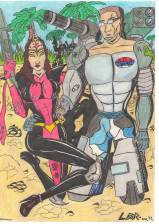 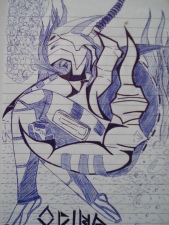 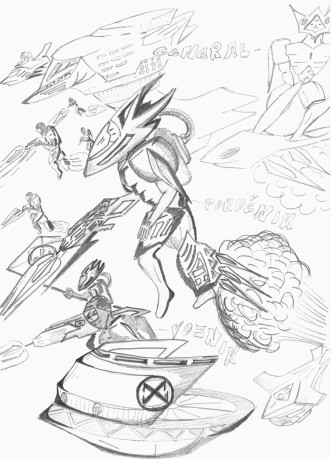 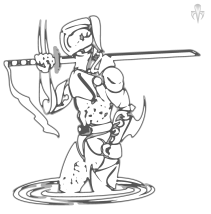 Writing came easy to me because I had strong imagination as a kid. I day dreamed, consumed by strong emotions that came out of me, making me look like a lunatic. Watching American A – class and B – class movies gave me motivation to learn more, to be one of the actors that had opportunity to kiss beautiful girls and everything that followed that lifestyle. That means I was in contact with English language, before it was my time to learn it. By the time I changed schools level, I already had vocabulary of 5 000 words. At age 11, I fully started to learn English.  My desire to learn another language entered turbo drive when movie entertainment machine was explained to me. I figured that writing for a movie could be my calling because I got assured; I’ll never star in a movie. Let’s be honest here, I didn’t had luck to be born in America.

As every beginner had its fails, I had many of mine. Few epic fantasies wrapped in Slavic mythology seemed as good idea to start with, because that was a thing severely lacking in American film production. When class was intensively boring, I decorated my notebook pages with illustrations, often wrote one liner plots that would be good to see on screen, performed by my favorite actors. In 2015. I have decided to write and not to stop writing until I convince myself that progress is unachievable. Grammar stood in my way. Even today it is occasionally rising to the surface. I try to control it and brush it to perfection, but it is an ongoing and time taking process. My English is also broken, because, some FUCKS didn’t care to communicate on other language, but on their own. Teachers had problems with them, trying to beat some knowledge into their little closed heads and failed at the attempt. Since I accelerated at English, my presence at the class was redundant. I knew I’ll find some use for it in the future life, and here we are.

Spending my time off school, I had chores to do. I live in a village, so a lot of help and hard working was sort of demanded from me. Imagine you are using your strength to split logs and rise to remove sweat from forehead. You exhale hot breath to meet chilly air and gaze at the hazy landscape where only snow in the mountain peaks is shining attacked by warm rays of Sun. You feel the morning cold biting your inflamed skin as forearm cramps the iron axe in your palm… Damn, I feel GOOOD.

One thing I enjoyed more than others is working with wood, and since I like arts so much, why not make it more fun. It started with it when an idea came to me while chopping wood. A splintered piece of log was resembling of something I could use. That was the first wooden dagger I made. Out of all things I like doing; wood work is one I would define as a soul nourishment. I have made many other things after that. Among many I’ll list ashtray, key chain, incense holder, necklace and more. Challenge is to do it without anything else but a pocket knife, sandpaper and manual drill. 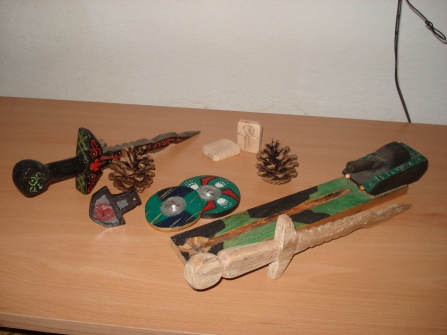 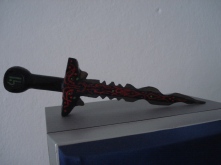 If you still hoped for a story, you can read these.